A stack is composed by a stack part and a config part (see Concept of a stack).

Our app is designed to easily mange the stacks content and configuration files through the Catalog Repository and Config Repository pages, with only need of providing SSH credentials and repository URLs.

As explained above stacks concept is a way to organize Infrastructure as code files. Additionally to this concept, it is important to take time to define what should we put in a stack.

The main recurrent interrogation from our customer is "how could I put my current application in a stack?"

To this question, there is no unique answer. The stack concept is really flexible and it will be up to the creator of the stack to define what it contains.

The 3 major points which lead how to design a stack are:

Then the design of a stack could impact it's

Keeping the previous points in mind, let's now see two concrete examples of application and how could it be defined as stacks. In addition, you can also read a bit more about Terraform recommended patterns (opens new window).

Here is a simple web application composed of compute instances on top of a network VPC. 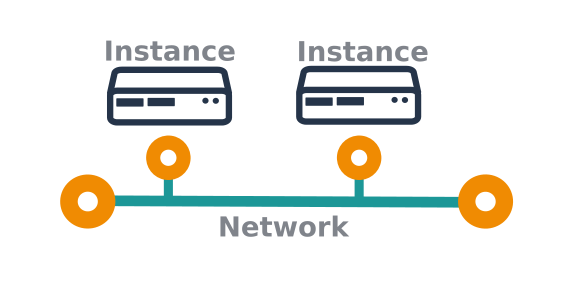 One approach would be to create an entire standalone stack. This stack will contain all resources to compose our application. Using infrastructure as code we will describe VPC network and compute instances.

This way each user of the stack would be able to deploy a fully standalone web application. The stack will create for each user a dedicated VPC network and spawn the compute instances on top of it.

This way your application is not anymore standalone but allows users to create a shared network using the network stack. And deploy several instances using the instance stack on this shared network.

Using the stack concept in Cycloid you will be able to link stacks together and let your users select the network previously created by the network when they will deploy their application using the instance stack.

In the case of shared responsibility across teams, the network team could create a network project on the Cycloid dashboard based on the network stack. And the developer could deploy their applications with the instance stack using the network created by the network project. And access to project limited using Cycloid role and policies management.

This approach could also be used and applied to any other components like Object storages, Databases, etc.

At Cycloid we highly use and deploy containerized applications in Kubernetes. let's see how we do it using stacks.

If we simplify our workflow around Kubernetes, it could be seen as two use-cases:

To solve our needs we split them into two defined stacks:

All this work can be found as part of our public stacks. We provide different infrastructure stacks to create a Kubernetes cluster on different cloud providers: