As described in the previous section, stacks can be really handy to manage Infrastructure, deployments or CI/CD jobs. But it's important to keep in mind a pipeline in a stack can described much more. A pipeline describe a workflow to automate or simplify any actions.

You can nearly automate or describe any workflow in a pipeline. The resource approach of a pipeline allow you to interact with mostly all existing external software. More details about pipeline specificities and configuration will be given in the dedicated pipeline section.

The following titles will illustrate some internal and customer usecases where stacks and pipelines are used for not common usecases.

As you could imagine at Cycloid we use the stack approach for everything. This is also the case for our demos. Through this usecase we will illustrate an automatic cleanup of infrastructure.

We created a small stack based on Terraform to deploy a WordPress application on several Cloud providers.

Then after a demo, when it comes the time to clean and destroy everything that have been created we decided to handle everything as part of the pipeline stack.

For this purpose we created a dedicated job which is triggered automatically one hour after a demo.

This job will use Terraform to destroy all cloud components that have been created. But also use Cycloid CLI to interact with our API and remove the Cycloid project created.

This way after a demo, everything that have been created on the Cloud provider and Cycloid side are deleted automatically.

Automatically create a dedicated environment for your developers.

Internally at Cycloid we use Github and pull requests workflow.

For each new pull request a dedicated test environment is created.

Going a bit deeper, everything start by creating a Cycloid project for our automation, let's take the example with our Frontend application. This project is composed of several pipelines/environments.

Part of the list of all environment, there is one called github. This one contain the following special pipeline.

This workflow could be sumup this way

Last part of our workflow is automatic cleanup. For this purpose we use the same method described above in Cycloid demo usecase. The dedicated env pipeline contain a self cleanup job:

This job ensure each time the Github pull request is merged , the dedicated infrastructure is automatically destroyed using Terraformn. And the Cycloid environment is removed using Cycloid CLI.

As described in previous use-cases pipeline can handle and automate complexe workflow. But it's important to keep in mind pipeline can be really simple and solve/automate basic needs.

Pipelines are not restricted only to CI/CD or infrastructure management.

A lot of small daily actions can be automated or simplified for your users by a pipeline.

An approach is to create automation or a dedicated job that a user could trigger to do a simple task. For example setting on/off a maintenance page on a website: 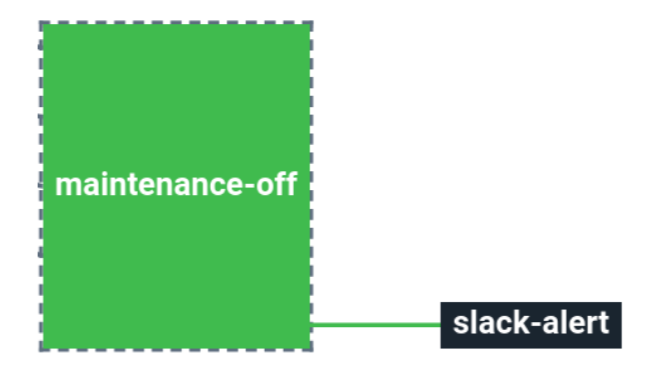 This example come from one of our customer need. He wanted to be able in one click to set his entier infrastructure in maintenance mode. Which involve to run Ansible on several servers. To solve this need we created a dedicated job, when triggered it run Ansible with the expected arguments, then send a Slack notification to warn users that the job have been done.

This is just one example from a huge list. Anything you have in mind could be simplified and automated by using a pipeline.

To give you other real life example of we our customers are doing with pipelines:

# Gitlab as CI and Cycloid as CD

This use-case show how Cycloid could cohabit with CI tools. Sometime you want to handle a global and complexe workflow using Cycloid. But keep the local developement CI managed and handled by your dev team with the tool they used to work with.

Keep in mind as best practice we recommand to use Infrastructure as code for everything. So in the use-case above as described in Designing a Stack section, the good approach is first create a stack to manage and handle the Kubernetes cluster that we will use.

Then we can think of the actual use-case this way:

As described earlier stacks are not limited to infrastructure. At Cycloid we tend to apply infrastructure as code and stack concepts for all our needs.

This stack is pretty simple, it use Terraform to manage access to most of our services like Public cloud providers (Scaleway, Gcp, Azure, Aws, ...) but also lot of others tools like Github.

We use to speak about infrastructure and basic application deployement but at Cycloid we use Kubernetes. Most of our services are deployed on Kubernetes and managed by Cycloid platform.

There is several approach to handle and manage it with Cycloid. Our way to do might evolve in the future but let's see our current approach.

Everything as usual start by a stack to manage our Kubernetes cluster on Scaleway (Kapsule) using Terraform. 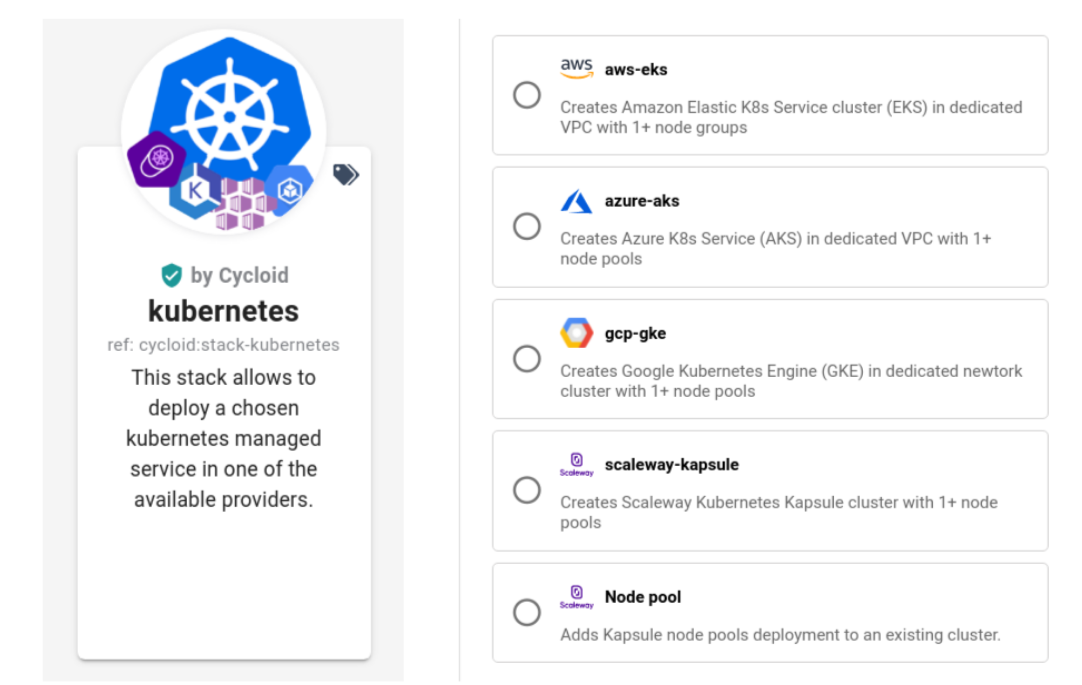 The stack approach is also applied to build docker images.

This stack use a git repository as input. Build a Docker image from a Dockerfile, then push it into a Docker registry.

Internally we use 3 main approaches to deploy on Kubernetes. All those approach are part of a stack as well but the way we do depend of the need.

We use to prefer the Terraform related solution to manage Kubernetes deployment as part of others infrastructure resources dependencies.

Usecases presented here are only examples of the endless possibilities offered by Cycloid !